Moved by a conversation with friends this morning, Claire and I decided to post a short story (a very short story) that I wrote as part of Vital Signs Ministries’ Christmas letter of 3 years ago.  We offer it again as a Christmas meditation on truths that are as crucial to celebrate as ever.  And though it is a fictional tale, it is certainly illustrative of the hundreds of testimonies of its kind that we’ve heard in these last 40 years of pro-life work. We also present it as a fresh thank you for all the prayers, encouragement, and financial support people have given to Vital Signs Ministries to pursue its mission over these many years to cherish, defend, and promote the sanctity of human life. So, here is “A Christmas Reflection.” 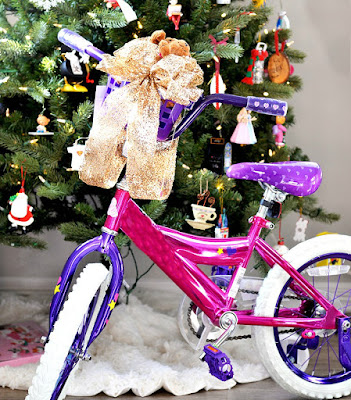 Darren tightened the last nut on the kickstand with a mild sigh of satisfaction. He then positioned the bike right in front of the Christmas tree so that Jill would see it as soon as she came down the stairs and turned into the living room. He smiled broadly at the thought. Jill will be so excited and happy. And, because the snow wasn’t slated to start until later on Christmas Day, he knew she would ask him to let her ride it as soon as it was light outside. And, of course, he would say yes, for he was looking forward to that thrill as much as she would.

He turned off the lamp, leaving the only illumination in the room to the colorful brilliance of the Christmas tree. As always, Janey had done a beautiful job decorating the tree, but the effect of those Christmas lights now reflecting off both the ornaments and the chrome of the bicycle’s fenders was particularly dazzling. Profoundly moving too. In fact, Darren had to wipe away a couple of tears as he imagined the joy and gratitude his daughter would feel tomorrow morning when she entered into Christmas.

He loved her so. And because Jill was his only daughter and the child who had come so far after the three boys – 13 years after Joe – she had won a very special place in his heart. And now, with Gary living with his young family in Texas, Harris in grad school in Oklahoma, and Joe serving on the USS Ronald Reagan currently in the south Atlantic, Jill was all they had close to them.

Darren sat down on the couch to relish the moment and to enjoy for a few more minutes the beauty of this Christmas scene. He let his mind sweep back through these last 9 years. Oh, he had loved raising the boys – well, it wasn’t always a fun job – but Jill had brought to Janey and him such different, such intense blessings. Like hearing her recite her poem during the Christmas program at school last week. And helping her with her report on Squanto and the Pilgrims last month. And seeing how bravely she dared (and conquered) the waves coming onto the beaches of Galveston last summer at the family reunion.

His coffee had gone cold but Darren sipped it anyway, caught up more in the past than the present. His mind flipped through a lively variety of images depicting life with their precious daughter. Was it only last year that she made the local paper for the Easter poems she wrote for residents of the nursing home? And the bravery she showed when she broke her arm. What a trooper she had been. And there were the endless hours spent with her dolls in the playhouse he had built in the back yard, the way she loved to dress up for the special teas with her grandma and aunts, and her passion for being read to before bed. What a lovely and loving child she was – tender and curious and engaging. How grateful to God he was that….

Darren’s breath stopped and he swallowed hard as another memory suddenly thrust its way into this sweet Christmas moment. And with this remembrance, the tears started to flow freely. For Darren was now recalling that July morning long ago when he and Janey had driven up to the Planned Parenthood. They had finally made the difficult decision to terminate the pregnancy. No, that’s not exactly correct. Darren fought back a convulsive sob as he admitted to himself the truth. They had decided to terminate Jill’s life. He buried his face in his hands and wept.

Had anyone asked them before Janey’s pregnancy test came back positive, they would probably have said they were against abortion. It certainly seemed, on the face of it, to be a cruel and unnatural act – an evil one even. But when they had worried over Janey’s age, their family situation, the fluidity of his position with the company right then, and the move they had been working on to a larger home on a nice acreage somewhere…well, everything was against having a baby at this stage of their life. They hadn’t felt very good about it, of course, but they figured an abortion was simply making the best of a bad situation.

However, Darren’s unease about the act (so invasive, so violent, so final) had only increased during the drive to the abortion clinic that day. For starters, they had left the house in the dark hours of early morning because they were driving to another city. There was an abortion clinic in their own city but Janey refused to even consider going there. She didn’t want to chance being recognized. That suggested to Darren that she wasn’t anywhere near the guilt-free attitude she had tried to portray. And then there was the troubling quiet of the drive. He had attempted some small talk at first but when he received stiff one-word answers or, more frequently, complete silence, he began to realize that this abortion wasn’t going to be the simple solution they had hoped.

And then finally they approached the neighborhood where the GPS was directing them to the Planned Parenthood. But as they drove down the street, two striking scenes arrested their consciences. On their left was a day care business and though there were no children present in the yard, Darren’s eyes viewed with stunning sorrow the swing sets, jungle gym, and small basketball hoops. He couldn’t help but imagine his boys climbing, running, and playing in such a place. His boys who had enjoyed such an active, happy childhood. His boys who had been allowed (no, make that welcomed) into his and Janey’s world. He knew that Janey was probably seeing and thinking the same things.

But then a bit further down the street and just as the GPS voice announced, “Your destination is on your right,” they saw a small group of pro-life people on the sidewalk. There were only 6 or 7 of them but they certainly made for a winsome sight, a strong contrast to the dark mood that had filled his and Janey’s hearts for the last month. Some of the pro-lifers held large pictures of infants emblazoned with phrases like “Please Let Me Live” and “Life: It’s a Beautiful Choice” and “We Can Help You & Your Baby.” A couple of the men in the group held colorful banners with similar messages. Darren slowed the car and pushed up his turn signal. But he didn’t turn in. Indeed, though stopped right in the middle of the street, he didn’t move the car at all. Instead, he looked through unbidden tears at the photos of the babies and then to the appealing smiles of the pro-lifers. He felt Janey’s tenseness beside him and figured she was feeling the same sense of dread and conviction.

Darren turned to his wife and reached for her hand. “Honey, we shouldn’t be here, should we? These people are right. Life is a beautiful choice. It was for Gary, Harris, and Joe. And it is for this little one too.

Beside him Janey dissolved in tears but she squeezed his hand and vigorously nodded her head. “Oh, thank you, Darren. Thank you so much. Ever since we got into the car, I’ve been praying for God to somehow stop us. I guess I’ve known all along this was terribly wrong. But it was like we had got on a slide and couldn’t find the strength to stop ourselves. But those people…well, they were the answer to my prayer, weren’t they? Thank you so much, Darren, for not turning in.”

Darren smiled. It was the first sincere smile he had enjoyed for weeks. “Let’s go home, okay?”

Janey wiped tears away and smiled back at him. Her whole countenance had changed. He saw relief and gratitude but also happiness and resolve. “Yes, of course. Let’s go home. But two things before we do, okay? I’d like to get some breakfast. You know, I haven’t eaten hardly anything for two days and I’m really hungry. But first, could we thank these people for being here?”

Darren had thought of doing that too and so he started moving the car slowly towards the curb. He pushed the button which lowered the window on Janey’s side of the car as two women came over. There was a brief but joyous conversation. And when Darren and Janey pulled away a few minutes later, heading toward the Panera restaurant they had passed on the highway, they had a lot of information the pro-lifers had given them including contacts for a pregnancy care center in their town and a pastor they could contact for ongoing help.

It ended up that Darren and Janey gratefully used those contacts in the following weeks. The pastoral contact had led them to switching churches and, through the pregnancy center, Janey had found another doctor as well as new friends who had been a great help in awakening their desire to know and serve God. And, of course, most important of all, that momentous meeting with the pro-lifers on the sidewalk had protected Jill from the barbaric destruction that Planned Parenthood had been so eager to commit. “Dear God,” Darren whispered, “thank You so much for delivering Jill…for delivering all of us!”

The cold coffee was gone. And Darren’s tears had dried. It was way past time for him to get to bed. He would, after all, need all the energy he could get to handle Jill on that bike tomorrow morning. But he couldn’t pull himself away just yet from the pensive beauty of the Christmas tree and its lights reflecting off the chrome fenders of that beautiful bike.