Will Yours Be a Car Wash Christmas? 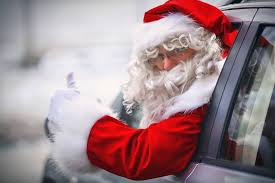 While leaving a speaking engagement in a nearby town the other night, I drove by a car wash that had this posted on a big sign, “Need a Christmas gift idea? Give free tokens!”

I smiled at what I figured was a quirky kind of joke. But, after a few minutes, I thought again. Maybe it wasn’t a joke at all. With the modern Yuletide so awash in remarkably garish, gratuitous and expensive gifts, maybe these guys have gone in a completely different direction — opting instead for something as mundane and impersonal as car wash tokens.

Is this what Christmas has come to?

In the “happy golden days of yore,” giving presents required some personal investment. Dad made you a little wagon; Momma knitted you a scarf; Grandma baked you a pie. Even after Christmas began to be commercialized, shopping for family and friends was a time-consuming activity — not because there was so much to buy but because you were searching for just the right gift, something you knew the recipient needed or wanted.

That kind of Christmas shopping is almost nonexistent nowadays. It no longer involves thinking carefully about what to buy. And making something by hand? Good grief — forget about it. We’ve lost the time. We’ve lost the talents. We’ve even lost the desire itself to expend our own efforts in the creation of a Christmas present. No, just give ‘em a gift card to a department store or to an online company.

One of the causes for this condition is that the commercialization of Christmas I mentioned earlier just got further and further out of hand. One Christmas gift wasn’t enough for little Timmy. He now had to get 2 presents, then 4 presents, then 11 presents. And the Christmas lists expanded too. No longer were parents expected to give presents to just their kids (and maybe a little tip for the milkman and the paperboy) but to practically everybody they knew.

So no longer could the gifts be very personal. How could they be? Dad can only whittle so many flutes and Mamma only sew so many dresses. Furthermore, you were coerced by advertisers, storekeepers, peer pressure, and an distorted doctrine of what true affection required (one’s worth was measured in quantity of dollars spent) into a whole new system of “celebrating” Christmas. The modern holiday no longer emphasized reveling with friends and family — and sharing gifts with those closest to you something reflective of your personal devotion to them. It emphasized instead the mania of Black Friday, excessive spending, debt, stress, and resentment. The giving of gifts became one of the banes of Christmas rather than one of its blessings.

Can we go back? Can we recover some of those warmer, truer, healthier Christmas customs? Of course. It might take some courage. It might take some explanations. And it might take some sacrifice. After all, baking cookies takes longer than buying an iTunes gift card. But if we want our lives (and those of our family members and friends) to find in Christmas some genuine affection, spiritual meaning, and moral stimulation, we need to concentrate again on quality, not quantity.

Our country can’t afford anymore to keep Christmas according to Madison Avenue. The consuming spirit of consumerism (pun intended) has ruined our economy and spoiled our culture. And though it has left in its wake a false sense of entitlement, irresponsible expectations, and a secularized and commercialized Christmas ethic, we can start rebuilding. Recall for a moment the intense warmth and hope you feel when watching It’s A Wonderful Life, White Christmas, or Miracle on 34th Street. Those feelings have nothing to do with Christmas presents but rather with the invaluable treasures represented by romance, family, redemption, community, and festivity.

With love, reason, and inventive effort, we can indeed recapture some of that warmth and bring it into real life. Perhaps, like me, you’re unable to whittle or knit. Fine. But can you bake a pie? Decorate cookies? Throw a party? Sing a song? Tell a story? Write a personal Christmas card? Or, at the very least, spend some time trying to select a personal gift for your loved one rather than take the prosaic path of the gift card — or the car wash tokens?

(Note: This article was originally posted on Vital Signs Blog in 2011.)